The migration is something natural. In autumn when the night starts to be longer and colder, like the birds I want to go to the spring and change winter for summer.
Where in 2003? To the south hemisphere, to PATAGONIA.
Bariloche became my base camp in the northwest of Patagonia, surrounded by huge lakes and white Andean mountains.  I worked there on the Manso river like safety kayaker, but mostly on the high season between Christmas and February. Out of this high season it was the time to do some good expeditions.
1st ROUND TO PATAGONIA:  5.000 km in 15 days, 7 argentinians and one basque in one jeep. Departing from Bariloche to the south down the coast and come back through the Andean “Ruta 40”.
Although at the beginning I didn’t like the mate infusion, by the end of the trip I was addicted. 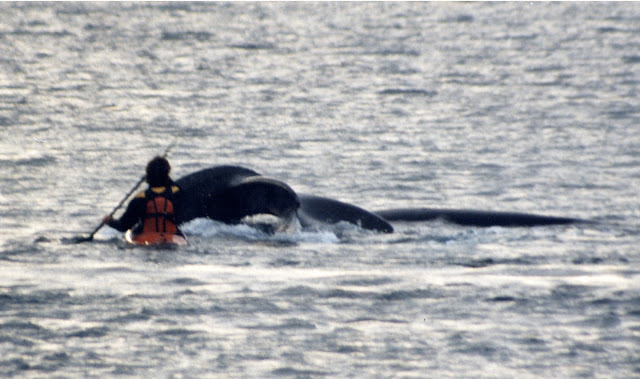 On my birthday we were in “Peninsula Valdes” when we jumped inside the 2 kayaks and 2 right whales came with curiosity. 18 meters mother quiet under me, all black around my kayak. 8 meters baby more active jumping, came closer and touched my kayak with its tail.
On the next round it came from the back moving slowly to my side with 5 cm of its back out of the water. Excited I loosed my right hand from the paddle and put it over the baby whale and I touched it from the head to the tail. In that moment I grabbed the paddle just in case…

With the breath not recovered yet, the mother whale submerged came from the back and passed me, lifted up its tail creating a wave and brought me… SURFING!   I remember the front of my kayak in the middle of this big tail.
It was orgasmic and each time I tell the story makes my skin hair stand on end.
Thank you Aldo&Co from Abraxas Rafting for the photos.
﻿
﻿﻿
﻿

1st ROUND TO PATAGONIA: Ampler departing from Bariloche to Ushuaia (the most southern city in the world) in Tierra del Fuego, and coming back through Chile. Sua, Haritz and I departed in our “honda civic”, but at the chilean border in the ‘Estrecho de Magallanes’ Haritz realized he had his passport thousands kilometres away in Bariloche. “Have good adventures on your way Haritz!” and he had them.

We arrived very late to the south-east corner of the continental land, took the sleeping bags and went to sleep at the beach. Doubting if we were dreaming we woke up surrounded by hundreds of penguins. Funny their runs.
After taking this photo to the penguin that was relaxed in its nest, I wanted to take another closer, and when I touched quietly the branch to put it apart,
ZAS!   Suddenly I stood up lifting my left arm (photo camera on my right hand) and I had a 70 cm penguin hanging from one finger, and didn’t want to loose me, and me shaking it. Finally it loosed me, felt on the belly and came back to its nest. I still have the mark of its kiss.
﻿﻿﻿
In Ushuaia used to live the “Yámana” when the europeans arrived, a nomad canoeist tribe. They were living naked putting seal fat on their skin. Each family used to move on one canoe with the tasks well divided. The father guiding with the paddle and hunting sea lions with the harpoon , the mother diving for seafood and the kids keeping the fire on. In a few years they almost extinguished. In 2005 there was only one Yámana alive.
I am also canoeist and nomad, and I’ll disappear too. 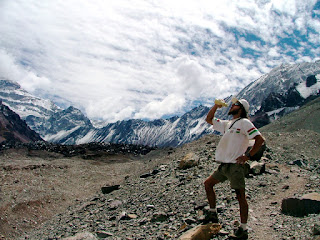 MOUNT ACONCAGUA (6.962 m)
Sua and I started hiking the normal route to the peak the 27th Feb 2004 without guide neither porters. It was cheaper at low season, but less probability to reach the highest point on earth out of Asia.
﻿
﻿
From Plaza de Mulas base camp we hiked up Cerro Bonete (5.000m) to acclimatize. 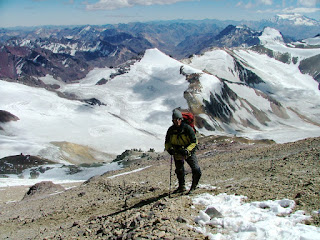 The 8th day we were at the last refuge at 6.000m, alone with another mountaineer.
After midnight I was melting the ice. After some previous hard times, that day I was feeling strong and acclimatized. The wind was strong too, too much.
The other mountaineer didn’t go out of his sleeping bag but I was decided with my death father’s photo inside the pocket.

We left at dark with lamps and with white iced beard saw the most amazing sunrise I ever had. Long colourful lines on the exceptionally curved horizon cut by the huge triangular shadow of the Mount Aconcagua.
At around 6.300m high Sua’s hands and feet started freezing. The wind was rough and too dangerous.
﻿ ﻿

It was time to come down to the earth, time to value privileges like having a shower, shitting sitting, having dinner at the table in a restaurant and sleeping in a bed.
﻿﻿