The double drop on the Zinketa (PIR, eng)

When we kayaked the pyrenean Zinketa river in summer 2012 we talked with Gorka Ferro, the local boy, and we search for information about the old impassable stretch of the classic section. 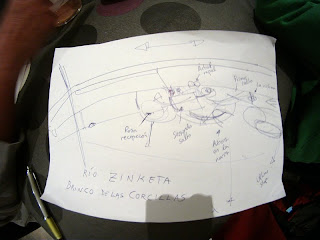 This is the sketch we did with him.

The short canyon is usually porteaged and conceals two consecutive waterfalls. It´s so narrow that it has seen the deer jump from one wall to the other. Hence its name: "El Brinco de las Corcillas", =The Little Deer Jump.

We wanted to run it for a while and this time we went to look at it closely. 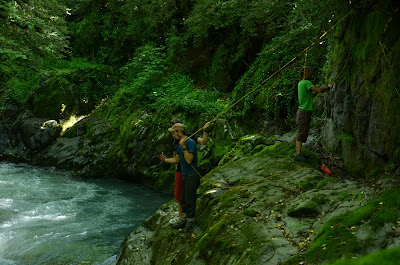 I could see the line but the consequences of not doing well were serious. The first jump sents you to the left against a large stone nose, the walls were undercut, behind the waterfall too, and the water was returning before the second jump. The most dangerous was this pool of 10m in length between the two waterfalls.

The canyon was so narrow and deep that we could not do safety without more people or climbing gear, and we did not have them. We were keen but it was not advisable to jump without security so we withdrew it and kayaked the upper Zinketa and the red canyon sections. 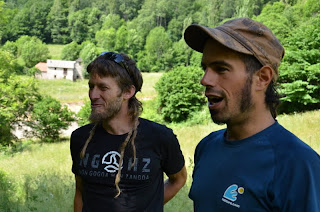 The day off the following week we returned to the Zinketa hidden valley, this time with better human and material resources. To warm up we paddled the upper Zinketa and had less water. We were not kayaking with good feelings, so Txomin decided not to jump. But Mino was with firm decision: "Today is the day, we will not have security and cameras another day!" That push was what I needed, then let´s go! 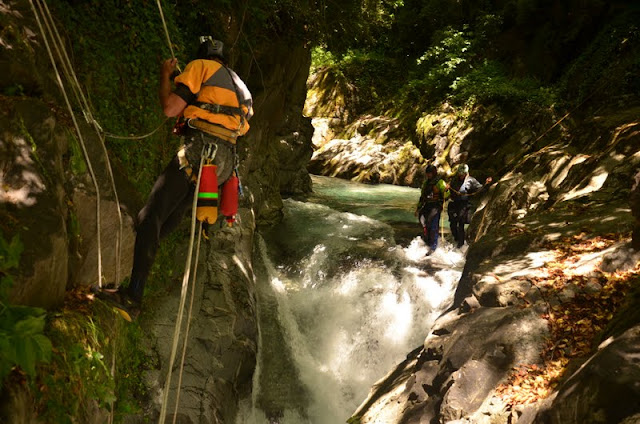 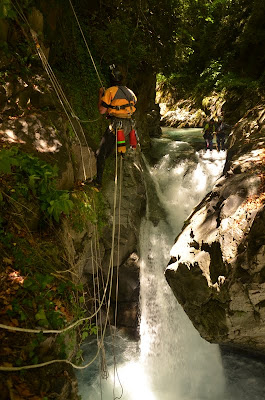 Everything is almost ready. Security: hanging on the ropes Sergio in the center pool and Txomin at the end. Photography Clara Ocaña, Ima Badiola and Laura Cashmore. Fermin Perez "Mino" and Eneko Yarza changed with kayaks on the river. And more viewers up in the trees.


That big stone nose is where the water wants to send you and avoiding it is the hardest thing of the entire canyon. Mino was send towards the nose but was not hurt, just hit the kayak.. 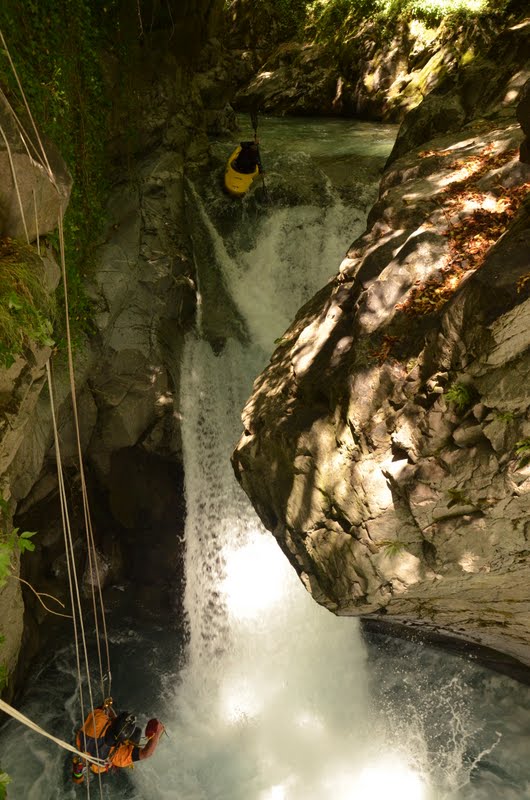 There I go getting into the penultimate stroke and Sergio attentive to the safety rope. This entry to jump is very technical and precise. 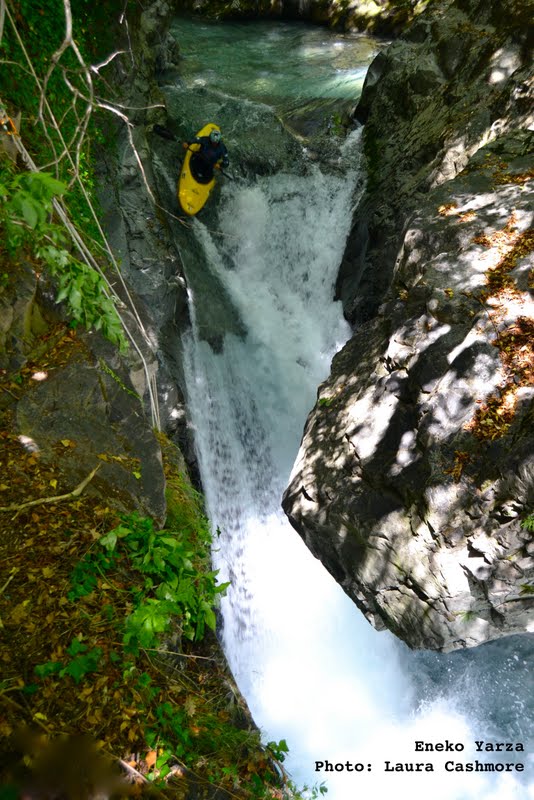 Close to the right wall but with care because it bounces to the left and there is little depth to put the paddle in the water. 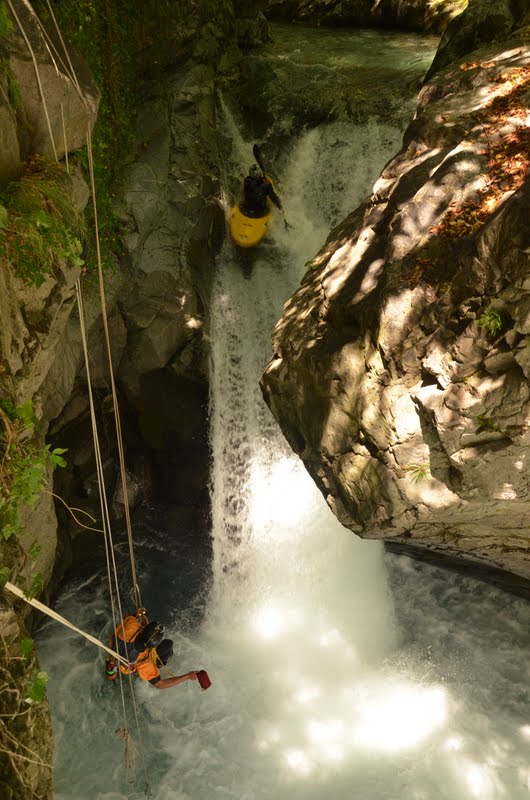 Last stroke, there I wanted to be! I crossed the camber! And flight completely avoiding the nose. The lively audience screams as they feel calm the nerves of the disaster. 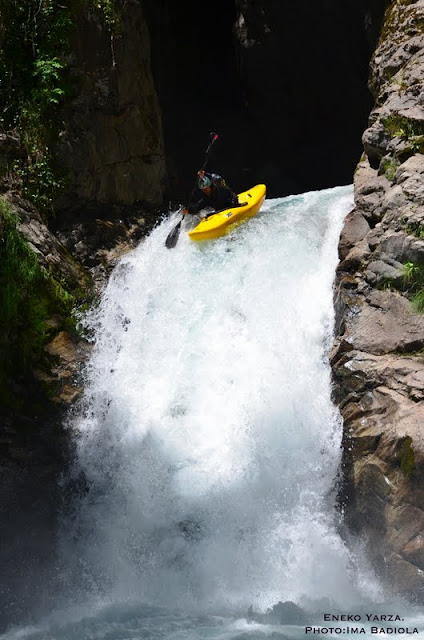 I paddled straight to the second waterfall out of the dark shadow to sunshine. Here there is no further danger and is enjoyable. 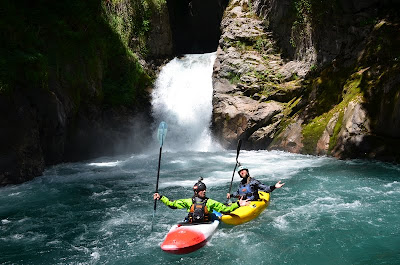 Glad the two, although Mino slightly less, in front of the shade&sun of the Little Deer Jump. Ay what a nice rush!

Thanks to the whole team that supported us, eskerrikasko. 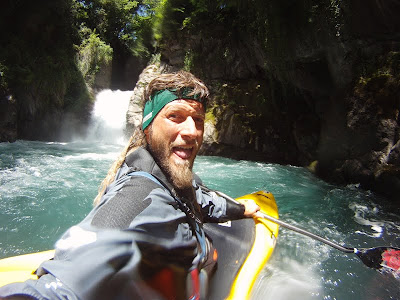 This is a piece of plastic with which I am so happy, the ZET kayak. Lightweight, hard plastic, very comfortable inside and navigates very well. Even being number one selling kayaks in Germany, I am the only one carrying a ZET kayak in the spanish state. And why? not because people do not want it, but because there was no chance of buying a ZET kayak throughout Spain.

But now they have arrived to the Pyrenees and whoever wants is able to buy any of the three models of the  ZET Kayaks: Veloc (smallest), Raptor (bigger), and the new Director model (the biggest).