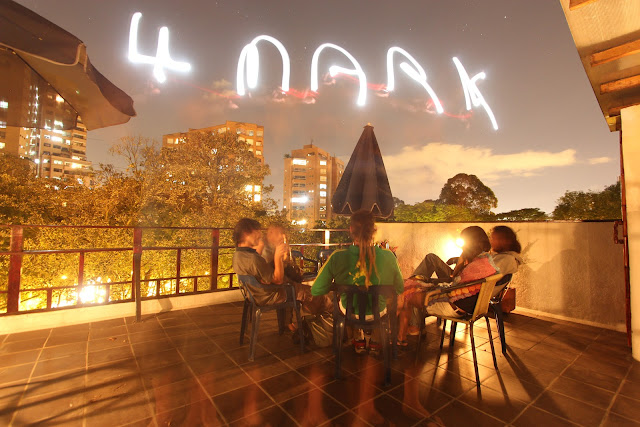 
After the death of Mark Hentze by a rise of the river we met in Medellin Kees Van Kuipers, Joana and other friends to help us in bureaucratic tasks (more statements in the police, paperwork for the prosecutor, etc).

On Tuesday 13 March 2012, 7 days after the "storm", it was the cremation of the body of Mark, a different ceremony: Kees stick on the coffin a funny photo of Mark with a wig, right there we made a toast with Guaro (brandy with anise) and above the coffin was put a big green bud to burn them together and give to Mark a smile for his next trip. Part of the ashes will go where the family in Oregon-USA and the other part to Mark's favorite river in Colombia, the Chicamocha Canyon in San Gil.

They were not easy days, memories and different feelings were mixed in the same pot. Something was needed to put an end and say goodbye to Mark. The other times I've lost "cat lives" I returned to the scene, and this time also wanted to return. Return to understand and clarify memories. Return to see and show the beautiful and wild canyon we discovered. Return to get some picture of the fascinating bedroom where Mark said goodbye and send it to his family. Return to admit and assimilate what happened. Return to say goodbye to Mark. 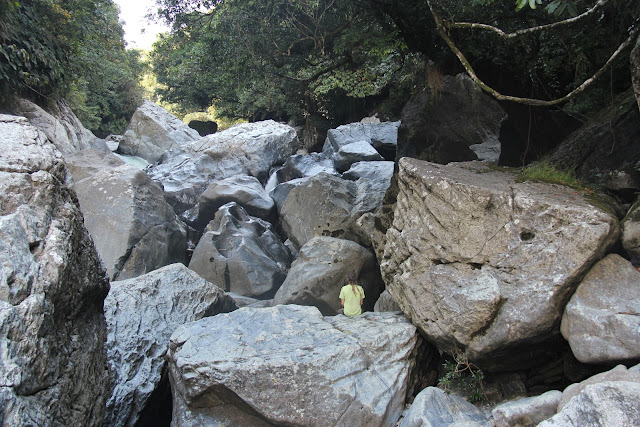 9 days after the flash-flood we left early from Medellin and after 2-3 hours on the highway direction Bogota we arrived to Pailania neighborhood in the municipality of San Francisco, where the last expedition was begun. 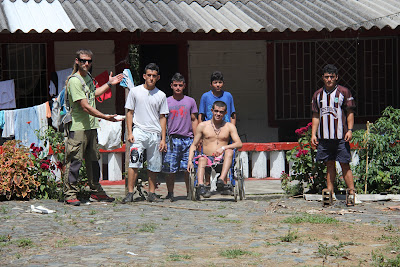 Those in the photo are some of the guys from the Majagual house in Pailania, who gave us some information to Mark and me before entering the river, who helped me out of the river, and the first to be launched in the search and found some stuff while police and firefighters were drinking coffees.

In this farewell tour of Mark we left the cab in this house. As a reward for what they did I gave them more money and thanks, and I told them that we intended to walk back to the canyon. They grabbed a machete and were ready to join us. Good people those from Pailania.

The trail to the river leaves behind the house (30min) and then going downstream along the left bank with no path to the waterfall of the canyon (45min). This is the same route that I took after the flash-flood, but now I knew the way and had shoes


This is the class 5 rapid I kayaked. Here the river begins to be steeper. 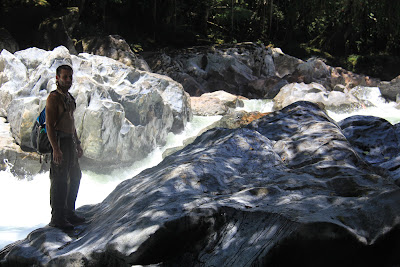 We continue looking for the way down the left bank, the right is worse. We are entering the canyon. 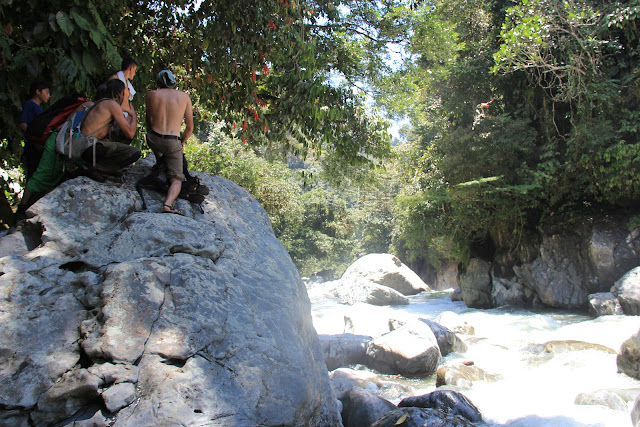 This is the last rapid Mark and I ran one after the other, and here we came out to begin the long and difficult portage over rocks. 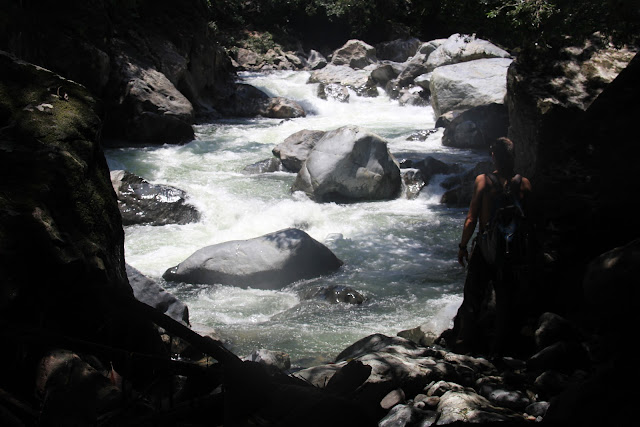 A couple of steps down is the waterfall siphon.  Feelings begin to surface ... 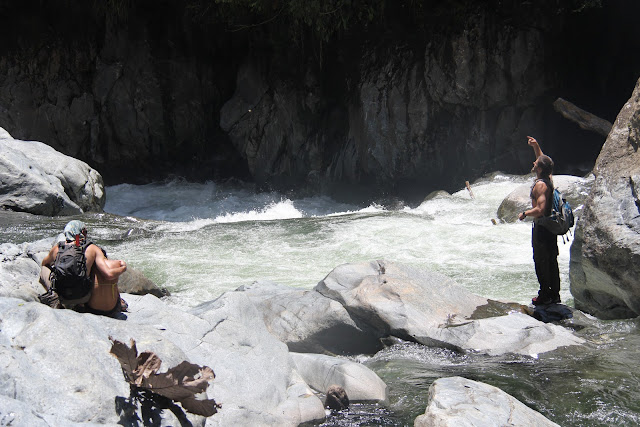 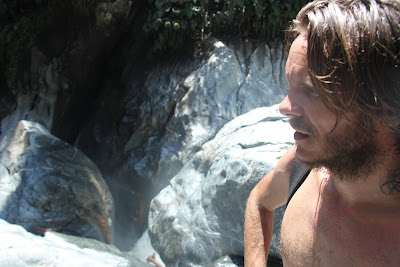 Behind there is the waterfall that disappears under the rocks. Dutchman Kees Van Kuipers, a great friend and the most knowledgeable of Colombian rivers with Mark Hentze, watching the show that comes downstream. 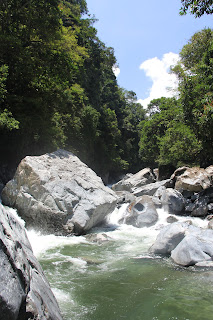 =>  This is what you see upstream from the waterfall. They are not small stones and in low water all the water goes from the other side, from river right. Today farewell day the river flow is about 20cm lower than when we kayaked. From here came down the big wave

And this below is what is downstream from the waterfall. As when I came with Mark there is no water flow from river left. The flat rock you see to the right of the person was my bed, and 3 rocks downstream, high and flat, was that of Mark. On the flood the biggest rock in the middle of the river was under water and was the reason of the water explosions to the air. The trunk of the large tree on the left was flooded and the big horizontal branch almost did not, and that in less than 30 seconds. 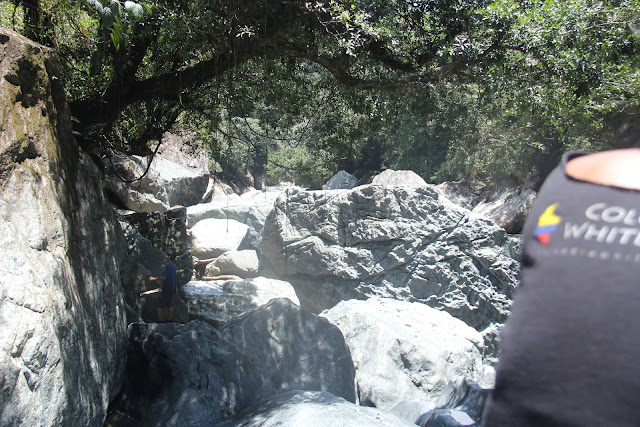 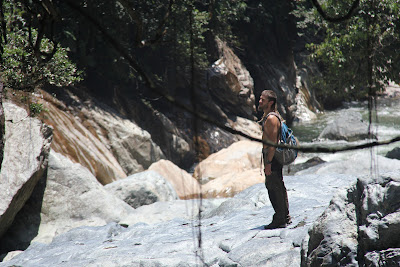 Where I am is where Mark was sleeping, imposing high flat rock, but no escape routes up from the wall, and a fall of 7 meters downstream of the rock, where the wave probably threw him away. From here down smooth walls. 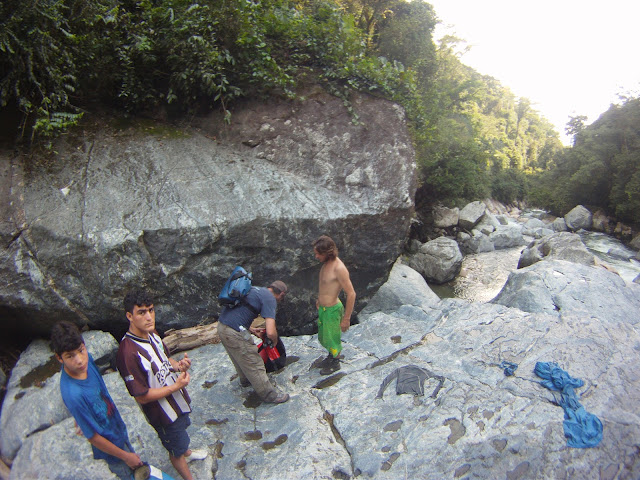 Mark and I left the kayaks here and went to look the rapids that were later, but how did we go down of this rock? This photo shows a trunk between the boys and a hole. We put a rope in the trunk and went down through the hole into a cave from where we left downstream. Then we returned through the same place, remove the rope and we made the fire to cook the last dinner aside the log. 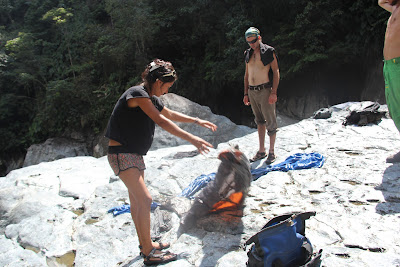 We found some souvenir for the museum of Mark (his sleeping bag, the tarp, etc). 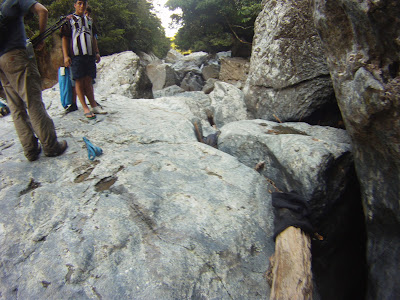 To this rock of Mark the wave came, the water went through this hole and filled the cave. My skirt stuck in the trunk and broke down as it received hits of rocks and logs. It's a special place, as being Plato's cave in reverse, and I left the skirt stuck there as a reminder...

This is the image Mark had from his rock to upstream. Top left is the start of the waterfall that disappears under the rocks. Where I'm sitting is my rock-bed, and that's where I told good night to Mark and I contemplated this wonder with the moonlight to 2 days of being full, and I lay down.

25 minutes later was the awakening. The wave came from above and quickly began to fill all the gaps between rocks. 5 seconds later I was in the water and when my head was out I started to climb up like a chimpanzee where I was, from the right of the picture, probably the only way out to the heights.

In this rock-bed I'm at about 5m of water level and water rose to where the trunk of the large tree on the right is divided into branches. The water rose about 10-12 meters. 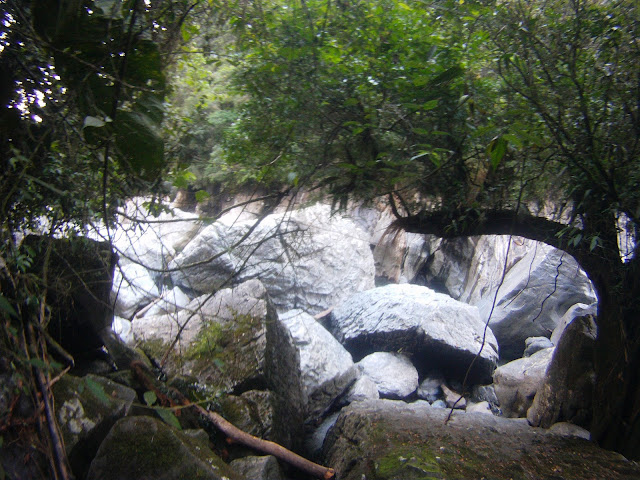 In the blink of an eye I was up here on the border between the smooth rocks and vegetation. I had come through the branches or vines that are on the left. To the right is the reference large tree. 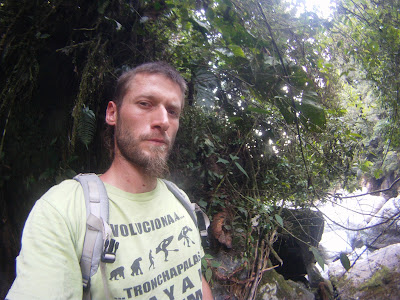 Here are the vines where I got up, and I can not remember how. In the second hit of rise this was under water and I kept climbing to the vegetation and spend the night up there. I am a lucky monkey. 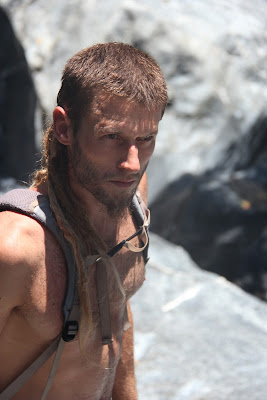 It's complicated the situation where I am and many feelings are mixed. I had a big scare and this produces fear. Miraculously, I survived and I'm grateful and happy. But my friend drowned and sorrow gnaws at me.

Each of Mark's friends who went to the canyon had their low moment, but the bad gulp must be assimilated for the water to continue flowing in its channel. 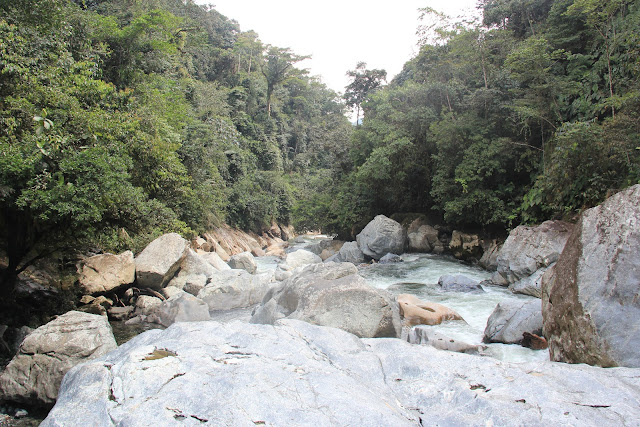 View downstream from the rock of Mark, beautiful and wild. From there was Mark Hentze gone, and there will not stop running water and floods, as the cycle of life itself. I encourage all the family and friends of Mark, water will not stop and neither life.

We went a few to the canyon of Mark, but on behalf of many. Andy Atkins the english-canadian, Kees Van Kuipers the dutch, Joana colombian, Emilio french, the 3 local boys and me. Thanks Team! 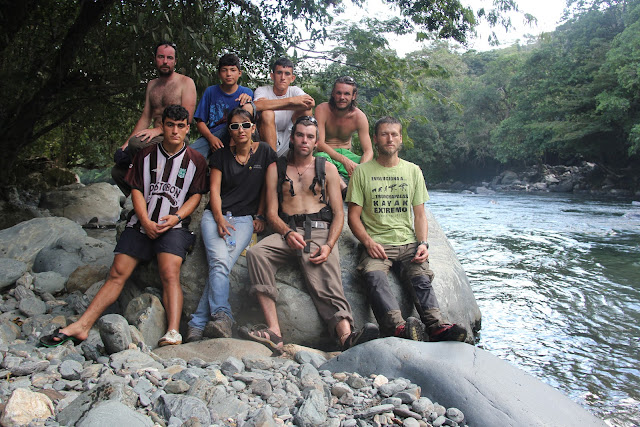 Leaving the river there is no joy but feels peace. "What a great hike!" Joana says. Tired from inside and out, is what we needed.

After the storm comes the calm, and through the whirlpool of water everything we must let go, to cleanse and purify. 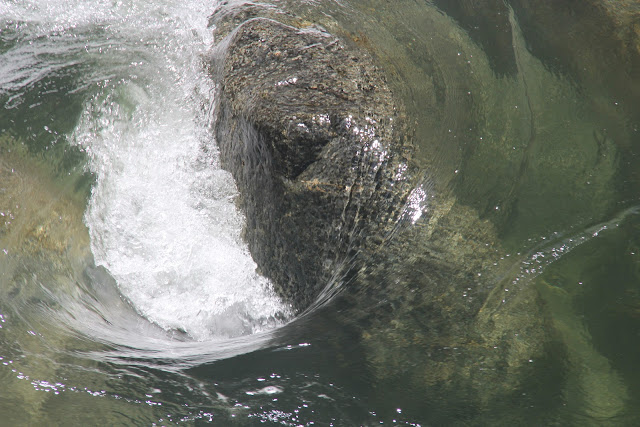 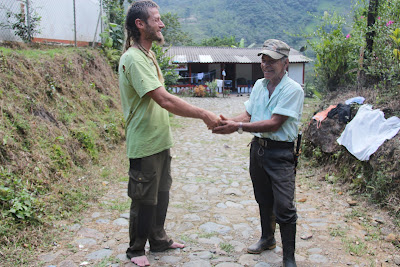 Leaving the river I asked for Luis the gold digger, the first person I met after the wave, who gave me sugar water and showed me the way to the road. Thanks Luis, thanks to the priest Abel, thanks to the boys, thanks to Nicos, thanks Joana, Kees, Andy, Joe, Niamh, Emilio.

Here is Eneko Yarza among us, and I will not stop, I´ll not slow down, I have been given extra time and I must take advantage of it. What would you do if something like that happens to you? if you see the end of this movie but it´s given to you extra time? would you be looking to spend time doing nothing? Think about that, for someone will be good. 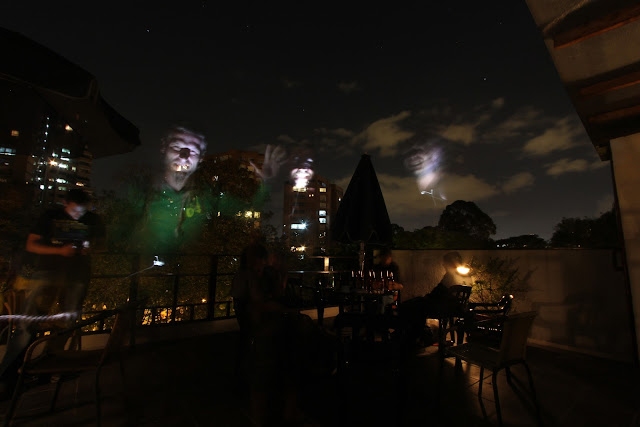 From the terrace of Casa Kiwi, where Mark was staying in Medellin, we say goodbye and the team dissolves.
GOOD BYE MARK!     ADIÓS MARK!      AGUR MARK!


I return to Euskal Herria (Basque Country) after one and a half year around Latin America. A cycle ends and another begins.     And THE BIG WHEEL KEEPS ON TURNING.

Link of the previous article: Death and Life in a Wave