Death and Life in a Wave (COL)

Mark Hentze prepared for a not return expedition, first descent of the Santo Domingo river. 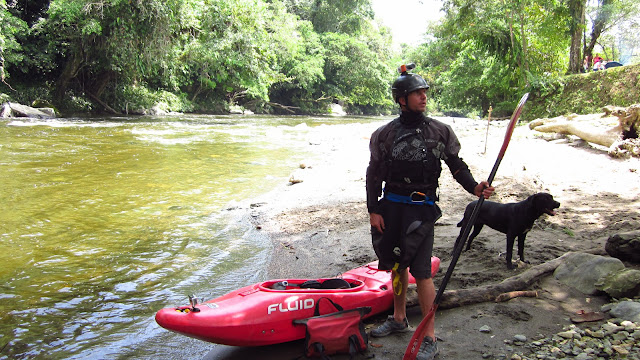 On Tuesday March 6, 2012 Mark Hentze and I (Eneko Yarza) started the expedition at Pailania bridge in the town of San Francisco in eastern Antioquia (Colombia). The river was nice and quiet.

Mark and I met 2 months before in Putumayo where we kayaked together the Mocoa river. This time we met in Medellin and organized what was going to be my fifth first descent in Colombia, an expedition he wanted to do for a long time: put in at Pailania bridge in San Francisco town and run the rivers Santo Domingo, Verde and Samaná norte until the highway bridge. 35 km long with 500m difference in height, dropping 300m of them inside a canyon from km 4 to km 8 of the trip. We estimated it would take us 2 or 3 days to complete, so we were going to eat and sleep on the river.

This is an area where a lot of antipersonnel mines are, and not long ago a big conflict zone with different guerrilla campsites. 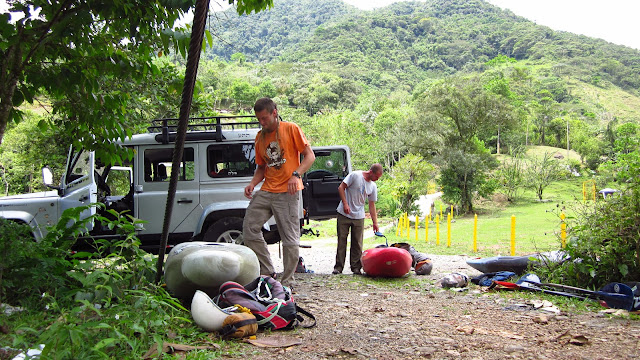 Friends from Medellin  Nicolas Mejía and Nicolas Yacaman came as a support team. They brought us in their vehicle, they filmed us some interviews, left us cameras to document good the entire expedition and they where going to be alert to any notice from the cell of Mark. Very cool these guys.


This below is the last picture would be left on land, all of the following would be taken by the river, all except one body with his pajamas and a watch. 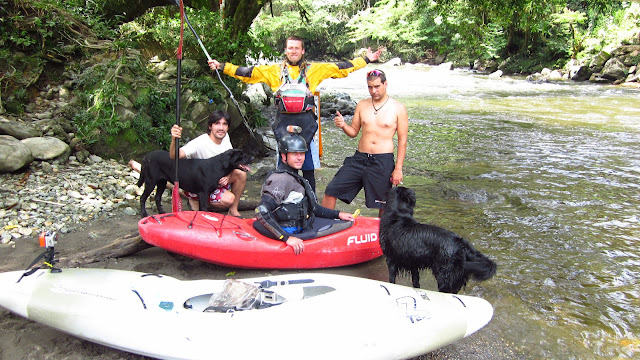 At first water was quiet and then began to drop. I ran a pretty class 5 rapid and soon we stopped on the left bank to look at what was coming behind these large boulders. A few steps later the river was falling 8-10 meters and disappearing for a few meters under large blocks. With the kayaks full of things took us time to portage these rocks. 30m downstream of the waterfall we left the kayaks and Mark said, "I want to stop here, I don't know what is happening to me, I'm tired". We looked at what was coming next, strong and continious rapids and drops minimum 1km long, tomorrow would be a long portage day through the near vertical wall vegetation on the heights.

While we cooked pasta two drops of rain fell so I searched a flat rock where to put the tarp as a roof. This rock was about 5 meters above the water level, we could sleep the two of us but was smaller than the rock Mark liked that was 6m in height and 10m downstream from mine.

Mark sent a message by phone to Nico Mejia at 21'40: "All right, many jumps. Nice."
There were lightning but no rain where we were, so Mark told me he was going to his big rock to sleep, 10m downstream on the same river left, and I invited him to come to my tarped rock if it'd rained. "Well, good night."

Sitting on my rock with the light of the almost full moon, I was looking upstream the giant grey and dry blocks. I made the last "good night" footage at 22'05 and fall to sleep with the sleeping bag's zipper open to hip.

22'30, second 0, awakening: A sudden roar takes me out of the dreams. I open my eyes instantly, I lift my head and see a white wall in front where before was dry. I get up at once, while I get out of the sleeping bag I shout twice to Mark, horizontal rain, I bend down to get off the rock and a wave over my rock pulls me down.


second 5 of awakening: The wave pulls me 2m to a rock with knee and hip and another 2m to the pool that was dry before. I am going around under the water, among stones and sand, and two thoughts go through my mind as I struggle up: "I have no lifejacket! This will be the end?"  Now head out of water and find myself five feet from the left shore-wall going upriver fast towards the stream of my rock-bed on the eddy that was forming, I don't want!, and between me and the wall my sleeping bag floating. With no thinking I put the arm over the sleeping bag and push to the wall and grab it. For that moment the water brought me up the 4m fall.

second 10 of awakening: I grab the wall and start to climb up with legs in the water with the moonlight. I estimate that the water was rising one meter per second and climbed 10m with feet in water. I go above the water and reach a roof and no scape up, I see a vine or branch far left, "will not work!" micro doubt, the water rising and instantly "Life or Death!" tell myself and I jump to it. I don't fall and like a cat escaping from the water I kept climbing and I shelter in the vertical vegetation.

second 30 of awakening: I'm alive! I am ALIVEEEE! Barefoot and wet in pajamas, legs shaking. I try to breath deep, 2 minutes, 15 meters higher than I was sleeping, more noise, what! the river takes another blow up and the big tree trunk is under water and the splashing of the waves wet me. Another shot of adrenaline and up in four feet in the vegetation of the wall. There is one meter almost flat, here I stay.


With the moon light I could see the white beast, all giant blocks under water, and explosions of water were higher than where I was. Mark! Mark! I shout, but I hardly hear me. The earth and trees trembling. I estimate the river flow increased from 15 to 300 m3/sec or cumecs in an instant.

I couldn't tell this story if anything of these things were not like that: sleeping bag open, sleeping bag floating between me and the wall, fast reaction, skills in water and rock, this vine or branch, and the light of the moon almost full, and maybe something else.

At 2 am it began to rain for 3 hours. I was very wet and cold, but those were tiny things, huddled hugged me, I just had to spend the night and in the morning seek for the road. Mark! Mark! I can not do anything.


At 6 am with the first light I came down the wall to the camp. The water was low and only 2 meters higher than yesterday afternoon. I went to the rock of Mark, there is no trace of anything, Mark! Mark! Find my spray-skirt stuck and broken. I stick my head in the hole from the rock of Mark to the cave, there is no signal and leave the skirt stuck to the trunk, the reminder ...   Find a strap 10 m in height. 7 in the morning, no signs of Mark, I'm leaving.

I walked barefoot almost 3 hours upriver from the shore. I find a gold digger and he says that the river is very high this morning, that this is in the rainy season. And it was 10 times smaller than last night! He gave me to drink sugar water and showed me the way, thanks. I reached the road in Pailania. I called the Nicos and began to move all the cards (U.S. Embassy, police, fire, etc..). Abel, the priest and president of Pailania, let me clothes, they gave me breakfast, and began to organize the search.

Day and a half after the flash flood was found the drowned body of Mark Hentze from Oregon-USA, 20 km downstream of the campsite in the Rio Verde and Rio Caldera confluence, the beginning of the River Samana norte. Mark came to Colombia every year since 2005 and just had the residence visa. He was one of the most knowledgeable of the rivers of Colombia and the author of Colombia Whitewater , the only guidebook of rivers for kayaking or rafting in Colombia, which myself had too. Mark Hentze, quiet and calm, never had any conflict with anyone, it was a good person, and after leaving a good legacy he said bye in an almost chosen place, in his beloved Colombia, in a river that he chose, in a canyon that seemed to him fascinating and in a high flat rock he chose.

Go along a peaceful journey Mark, and thank you.


That white train would take us both, but I got a wildcard and again got away. From the 7 lifes of the cat another I spent, and  I laugh crying because we are ants in a world of giants.


Thanks to life that has given me so much...


Link of the next post: Good bye in Mark´s Canyon