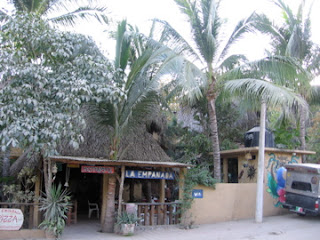 At the beginning of Dec 2010 Lalo, Txomin and I, Eneko, went by "La Golfa" car from Chiapas to the state of Oaxaca. Running out from the bad weather we went down the warm Pacific coast, to Mazunte and San Agustinillo beaches. Old chapters friend Rafa "Laparca" took us in his La Empanada restaurant and accommodation. Barefoot and with just shorts all day, around Rinconcito beach, sunset in Punta Cometa and beers in Luna Llena singing I smoke two joints song of Sublime.


Venezuelan Daniel Miranda El Pana (friend from Argentina 2008) and mexican Janet Lopez (travel mate in Mexico and Canada 2005) had opened Ola Verde Expediciones raft company, because in the surrounding area the Copalita river has 3 rafting sections, which I met in 2002. 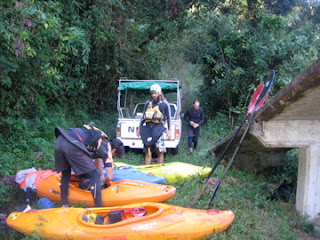 With them Lalo Ruiz, basque Txomin Abadia and I did 2 good kayak expeditions. ALTO COPALITA IV-V from Pluma Hidalgo to the start of the comercial section of Alemania, 8 hours non stop. 3 times all the river disappears under the rocks, 3 complete syphons, little nasty and arduous expedition. Since I was working on the Copalita in 2002 I wanted to descend this section. Was a shame that Janet destroyed their truck wheel at the lonely shuttle roads, and that Lalo had to pay 2 beers to each of us.

ZIMATAN IV-V pretty white granite canyon, little water but mother-rock riverbed with special water movements. At the end of the section is the El Chorro waterfall with undercut caves and syphons, where in 2004 I swam and next day came back to rescue the kayak from the cave behind the waterfall. This time I did a good run of the rapid-fall El Chorro and felt great.

If you need information of this rivers (put in, take out, etc.) you can ask Rafa in La Empanada in Mazunte, or Daniel-Janet in Ola Verde in San Agustinillo.


Daniel Miranda El Pana edited this video using my images. The last fall of the video is El Chorro.    Link to Oaxaca video

And that way arrived the dissolution of the team ZORRIAK MEXICO 2010 kayak expedition. The trip was awesome, participants elegants and amazing rivers, waterfalls, friends and experiences on the way. Lalo came back by "La Golfa" car for working in Jalcomulco, and Txomin and I went to Mexico City and Toluca to celebrate the last party with a big concert accompanied by our friends Gerardo, Miriam and Noe. 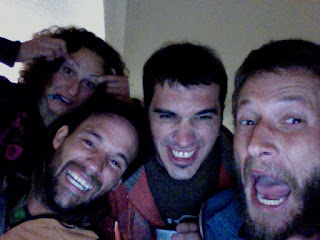 From there each individual to its personal way.
Posted by Unknown at 08:32