After a spring+summer work season on the Pyrenees, the time to emigrate arrived again in September 2004, and I went alone to the east of Canada. I didn’t have any flight back and following my inner compass I’d come back after 2 and a half years from Asia to Euskal Herria (Basque Country), doing a round trip to the world. 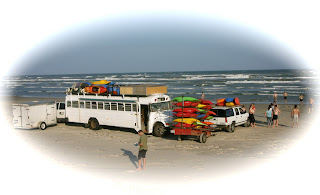 With this bus we see on the photo, the 2 vehicles and the 2 trailers (kayaks in one, cooking staff&food in the other) we crossed North America going from river to river. Starting on the Ottawa River at the east of Canada between the provinces of Ontario and Quebec, crossing USA through the east and we finished at the Pacific coast of Mexico.
I participated on the WILD program (Whitewater Intensive Leadership Development) organized by mister Jim Coffei with his Sprit Rafting Company. 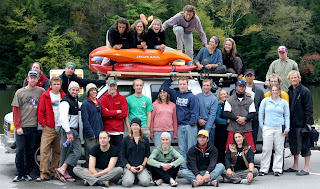 15 staff persons and 15 students, who after 3 months learning and enjoying will be ready to immerse into the river guide professional world. 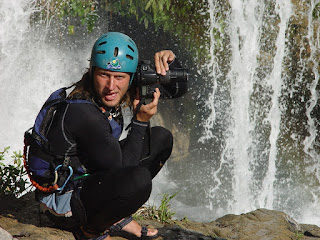 I was part of the staff and in addition to instruction and safety, my specific job was to be a photographer. 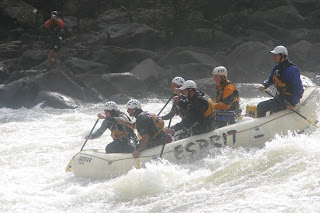 Mexican doctor Bernardo with the video and me with the photo camera, we descended all the rivers in kayaks like trip reporters, mates and friends.

On the Ottawa River learning the flip of the kayak initiation.
The theory and practical classes were in peculiar places. 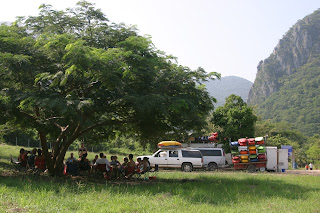 For example under this tree in Micos valley (San Luis Potosi, Mexico). 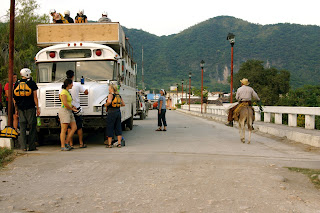 Or over the bus roof in Puente Pescados bridge in Jalcomulco (Veracruz, México).

USA   United States of America
After a first stop in Youghiogheny River in Pennsylvania we went to West Virginia. 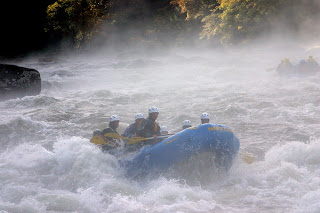 Here there is the Gauley River, powerful, fun and famous. Starting at the dam, 50 km navigable in 3 sections, 5 big rapids, entertainment guaranteed.

This dam releases water only 6 weeks per year (Oct-Sept), 4 days per week, with big concentration of people and boats. In one of these weekends is held the “Gauley Fest”, a river macro festival where I’d come back in 2005. 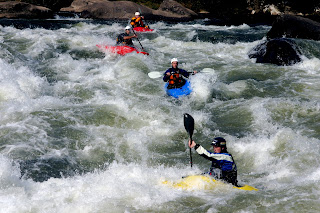 In these USA rivers we had Andrew Holcombe pro kayaker like a guide and instructor, as we can see in this photo of the start of the `PillowRock´ rapid on the Gauley river.
When I took photos of my crew and they went down the river in their rescues, I remember how I decided to run alone the hardest line. All the current was pushing against the left rock forming a big water pillow (PillowRock), and to its left side a 2m small and wild eddy delimited by vertical walls.

I reached the eddy, yes, but the adrenaline released was shot there, like being over a furious bull doing rodeo, the small eddy was moving up, down and in all directions rough. I was full of emotion and adrenalin when the unknown public started cheering and jumping with arms up almost more excited than me. I went out with no problem and afterwards I knew that this corner had a name: Room of Doom.
RESCUES 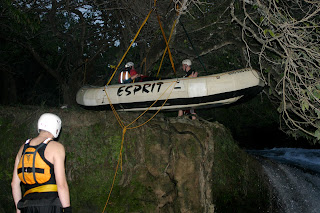 A river guide must know resolving rescue situations and to learn that we had not comparable resources. We received SRT 1 and 2 courses (Swiftwater Rescue Technician level 1&2) from ‘Rescue 3’ institution by the excellent instructor Jim Coffei. 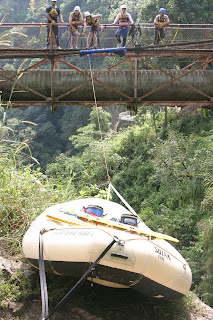 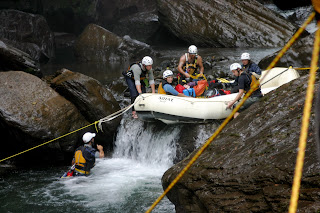 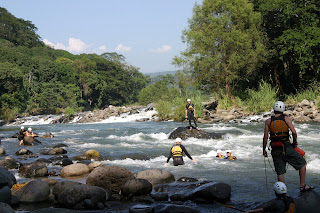 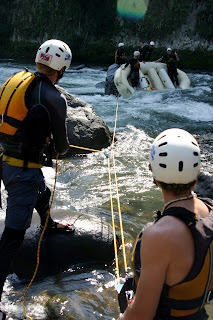 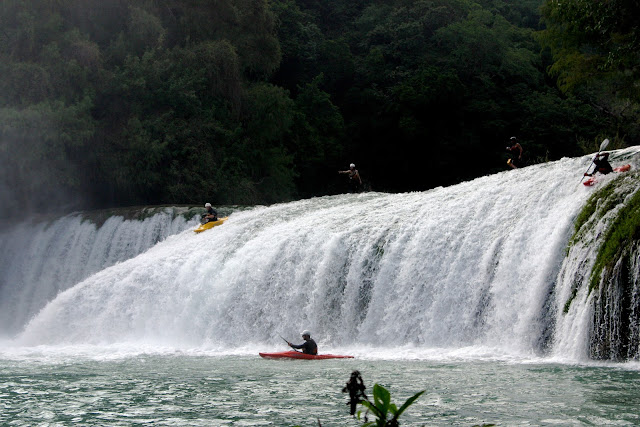 Our first stop was at Huasteca Potosina region in San Luis Potosi state, around Ciudad Valles. Here are the "Cascadas de Micos" waterfalls, a Salto river section where the white limestone formed by the minerals deposited by the water builds walls with regular corners, and adding the beautiful watercolour it offers to us a spectacular park to descend them in kayaks. 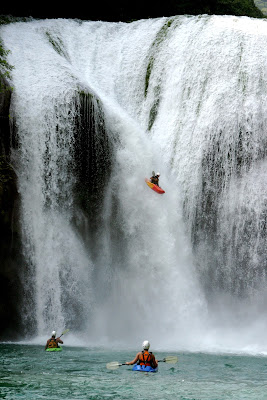 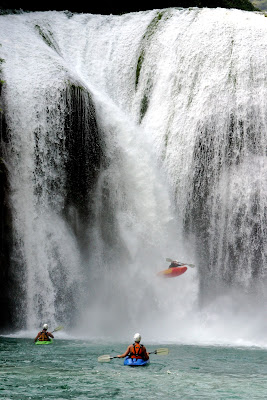 Our instructor mate Andrew Slater ran “El Toro”, the highest waterfall in Micos, while I was taking photos to him. But the front side of the kayak lift up too much and landed flat. A true rescue and to the hospital. A vertebral compression and recovered with repose. 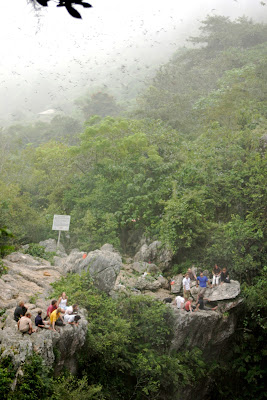 Out of the rivers we did a bit of tourism too. In San Luis Potosi we went to the "Sótano de las Golondrinas" (“swallow basement”), a conic shape cave, 500m deep and 60m diameter on the upper part.
At the sunrise thousands of swifts (they are not swallows) and parrots fly out continuously in spiral with total precision. At the sunset they are flying above the cave in circles and in groups they throw themselves straight into the cave, while we were listening the whistle of their fast fly.
Both were amazing, the sunrise and the sunset. 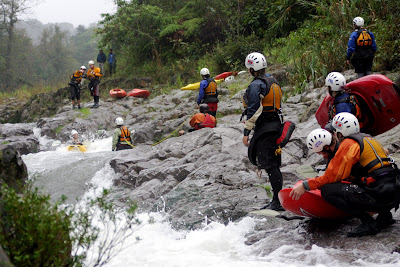 Afterwards we went to VERACRUZ state because here the water has eroded wonderful ways from the high lands to the Caribbean.
The Alseseca River is one of the best (right photo) near Tlapacoyan village. Mother rock, water and steep gradient, can’t ask for more. 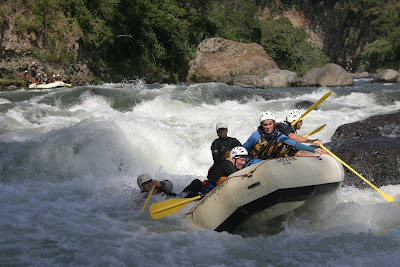 We descended Barranca Grande river in 2 days sleeping at the shore, and following through the Pescados River finished in Jalcomulco.
In this photo we see how the students are already learning %. 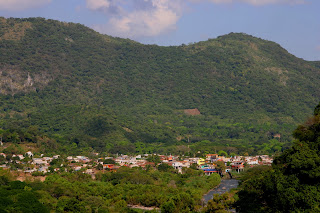 Sprit House was our base in Jalcomulco. Each house in this village has its colour, smell and music. As a defense of dog attacks it is enough bending down because they think you’ll grab a stone and throw them (they must have learned their lesson). At night the donkeys are storytellers offering cries and laughs.
For my birthday we did a big 'Reventón' party, organized by Gerardo and Miriam, DJs, Yeti and me fire spin dancing, etc. Pura Banda! 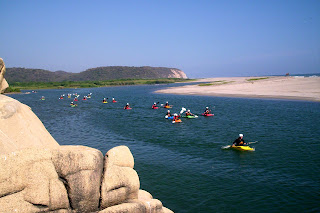 After a visit to the fat monkeys in an island of the Catemaco Lake near Caribbean, we went to the west, to the colourful state of Oaxaca on the Pacific Ocean. We stayed around Huatulco-Mazunte, where I already stayed working and living in 2002.

We descended the 3 commercial sections of river Copalita. With it we arrived to the ocean and finished kayak surfing the waves at the beach. Qué chingón! 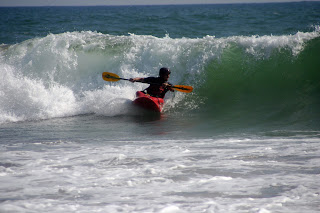 The WILD travel program finished that way. In 3 months everybody learned a lot and to some of them would change the direction of their lives. In my head was born a second generation of dreadlocks.
It was undoubtedly an unforgettable experience.
Next day after finishing WILD, Slater, Bernardo and I went to descend the Zimatan River, beautiful light grey mother rock with peculiar water movements. With small playboats only me decided to give to the last 8 meters high dangerous waterfall called 'El Chorro', but things didn’t go well. As soon as I landed I appear upside down against the right undercut wall, the current pushing me, doing all side and kind of rolls, but the kayak wasn’t moving. They threw me the rope but it didn’t work, head under water long time. In this dangerous place the time to swim arrived. I pulled the skirt and head towards the waterfall, grabbed the falling water with both hands and went down the dark deeps. Past some long seconds I appeared downstream with lack of breath. My kayak instead didn’t have the same luck and went to the cave behind the waterfall and stayed there. We couldn’t do anything else.
A day after I came back to rescue it with appropriate material, Bernardo and most disposed students recently become river guides. Everything organized I was the only one put at risk. Live bait roped I jumped flat to the water and speedy went into the cave through the side waterfall window, but there was not any kayak, and the water rough, and in the undercut wet walls climber fish from the documentaries. Suddenly the kayak appeared from the bottom as a missile, I hugged it and carabinered it with the second tow rope while the water movement was doing us spin, and with that the ropes rounding me… When I shouted the signal Bernardo and almost 2m tall and strong Bob Vranich started pulling my rope (not the 2nd kayak rope). I crossed the water curtain while trying to loose from the kayak rope, but it stayed tied to my ankles. It stretched my legs and luckily the kayak came after me.
All saved, and like penitence inside the kayak were hundreds small climber fishes. I stood the kayak up, opened the lid, the water going out but the fish climbing up the plastic! Incredible. The fish were rotted inside the kayak and the penitence of the stink followed me many days.
In 2010 I came back and ran El Chorro properly.
With this Wave Sport T2 (Transformer) yellow kayak (for many people not worth it) I crossed Central America by buses arriving to Costa Rica by the end of December. 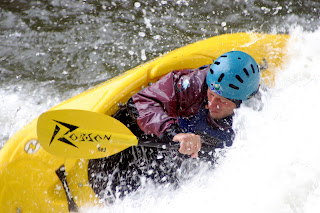