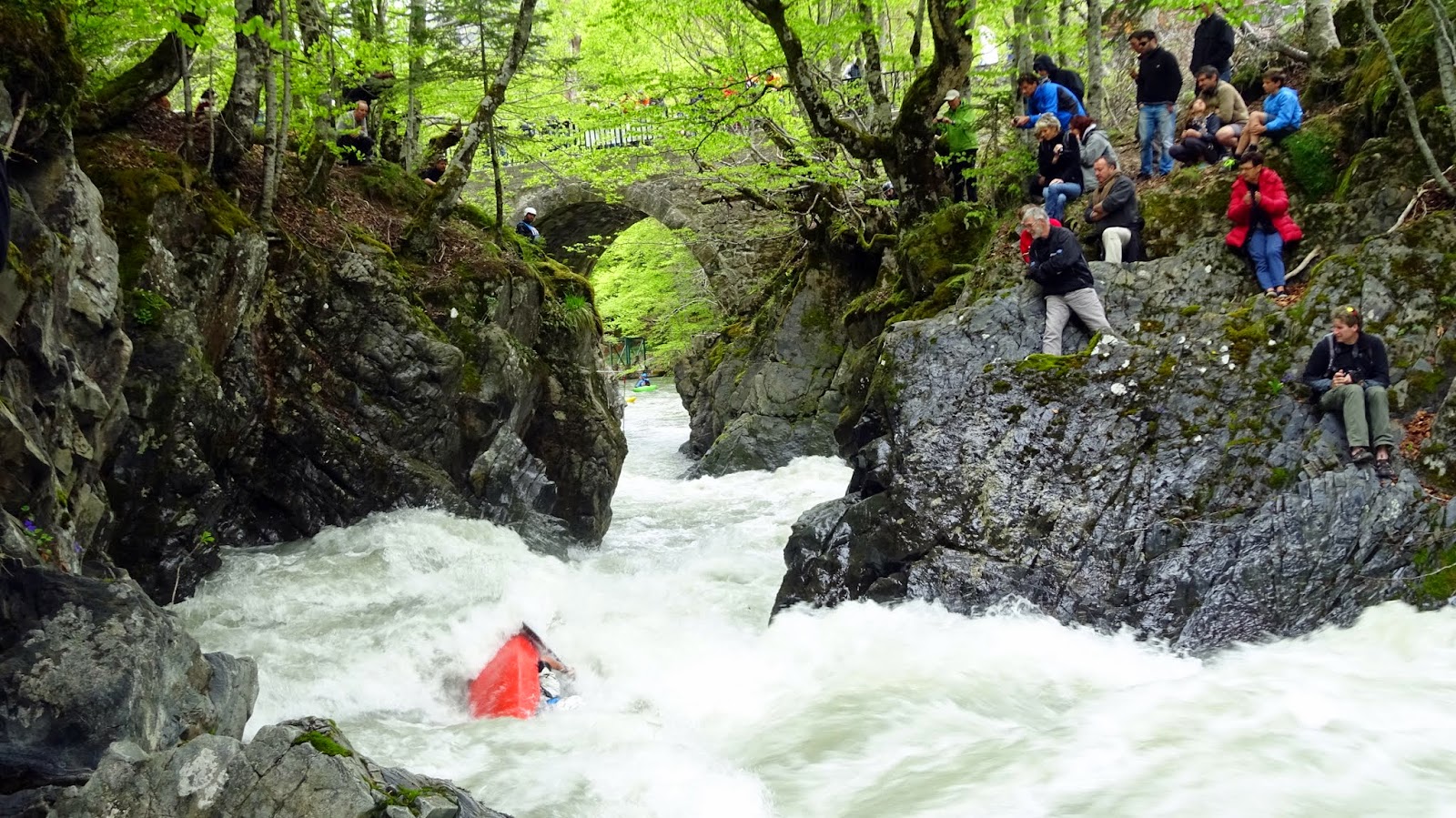 The first edition of the PBR in 2010 was special for me. I arrived the night before to find no one at the race course and I slept in my old van. Next morning I had the softest and quietest wake up of my life as there was 40 cm of fresh snow over my van soundproofing it. "The road covered of snow.. ok, the first extreme kayak race of my life is not going to happen today" I thought. But when I was ready to go ski touring the snowplow showed up and behind Clarisse, one of the organizers. Few hours later the snow was melt and the event celebrated, where I took the second and third positions in sprint and slalom. This is when I met the other organizers Nicolas Fayol and Eric Deguil, and a lot of french kayakers.
6 months later Eric and me had a very intense experience when he broke vertebrae ( Waterfalls TRUCHAS 18m + TOMATA 23m (MEX) ) but he recovered and became the winner of the Extreme Kayak World Cup 3 years in a row.


Now with more rust and more experience in our bodies we were going to celebrate the PBR 2015 from 1st to 3rd of May.

The first race was the Boater Cross on the Pau river. 6 kayakers beginning at the same time and racing a circuit, the first 2 go to the next round. We could see many flips and carnage as in the photo above, my semifinal.

So we were on the boater cross final where you need to be fully on the game and I did the fastest start. I passed the gates and touched the plastic on the rock properly while feeling the machine Eric Deguil behind, but I was going to paddle as a warrior too in this first position. 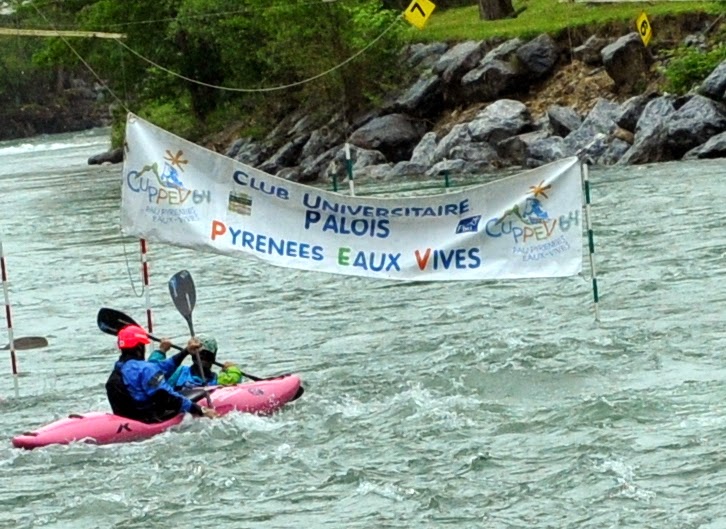 I had the victory on the Boater Cross race in front of Eric Deguil and Maxime Mitaut. 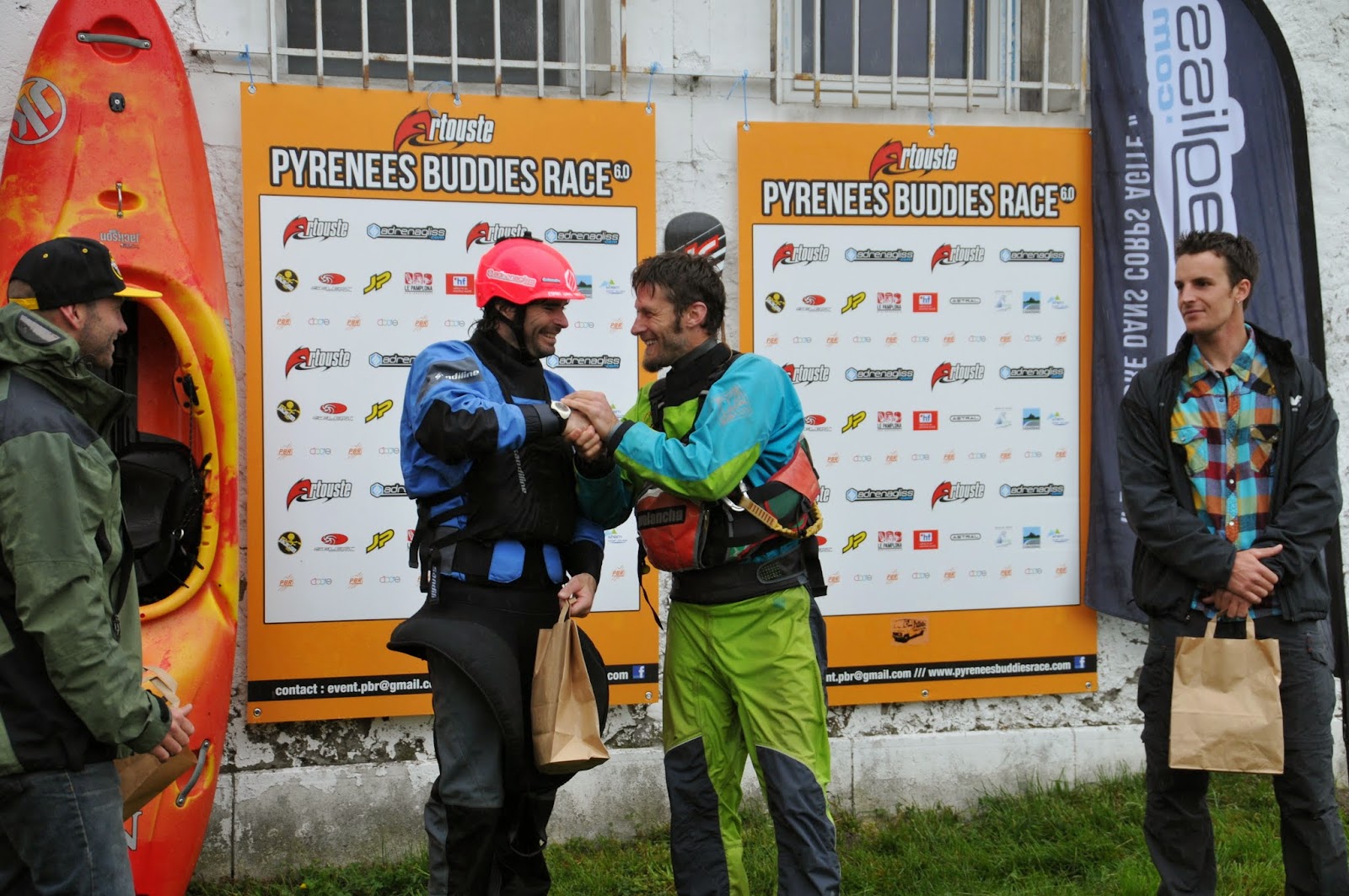 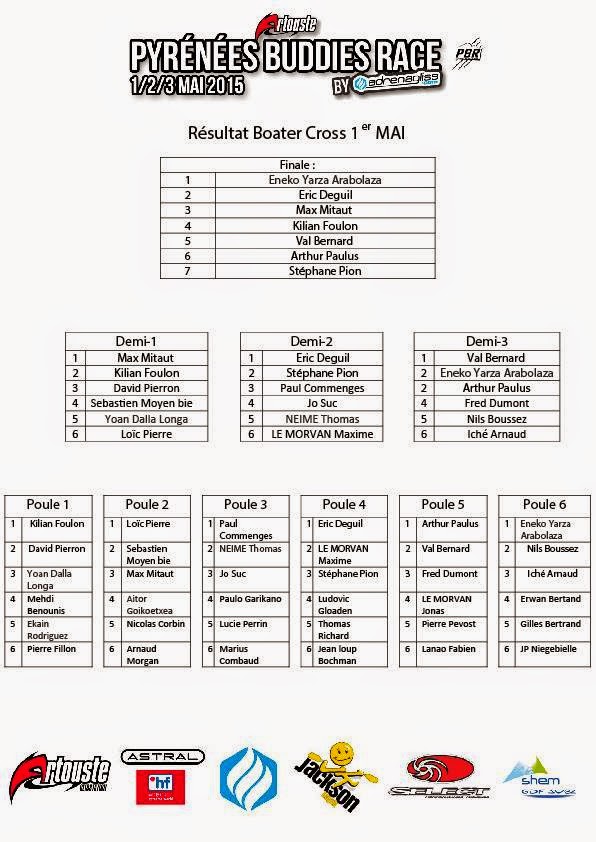 On the second day was the Team Race and the individual Long Race on the Brousset river high on the Pyrenees. Starting on the entry of the canyon and finishing near the dam. 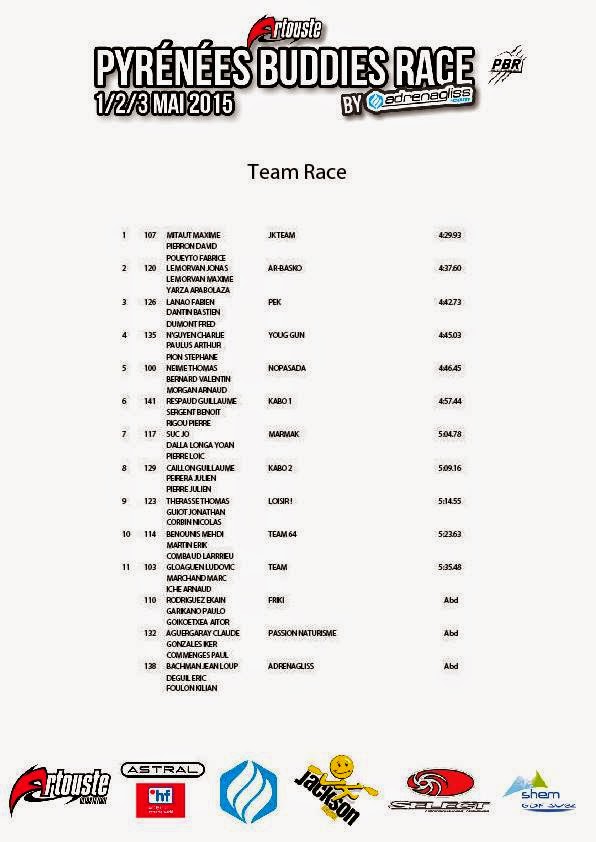 I was on the team with Jonas Le Morvan and Maxime Le Morvan french slalom kayakers and brothers trying to paddle as fast as possible keeping the eye on each other. The team race generally was an spectacle specially on the last hard rapid. We offered some show also in our team but finished in second position after Max, David and Fafa. 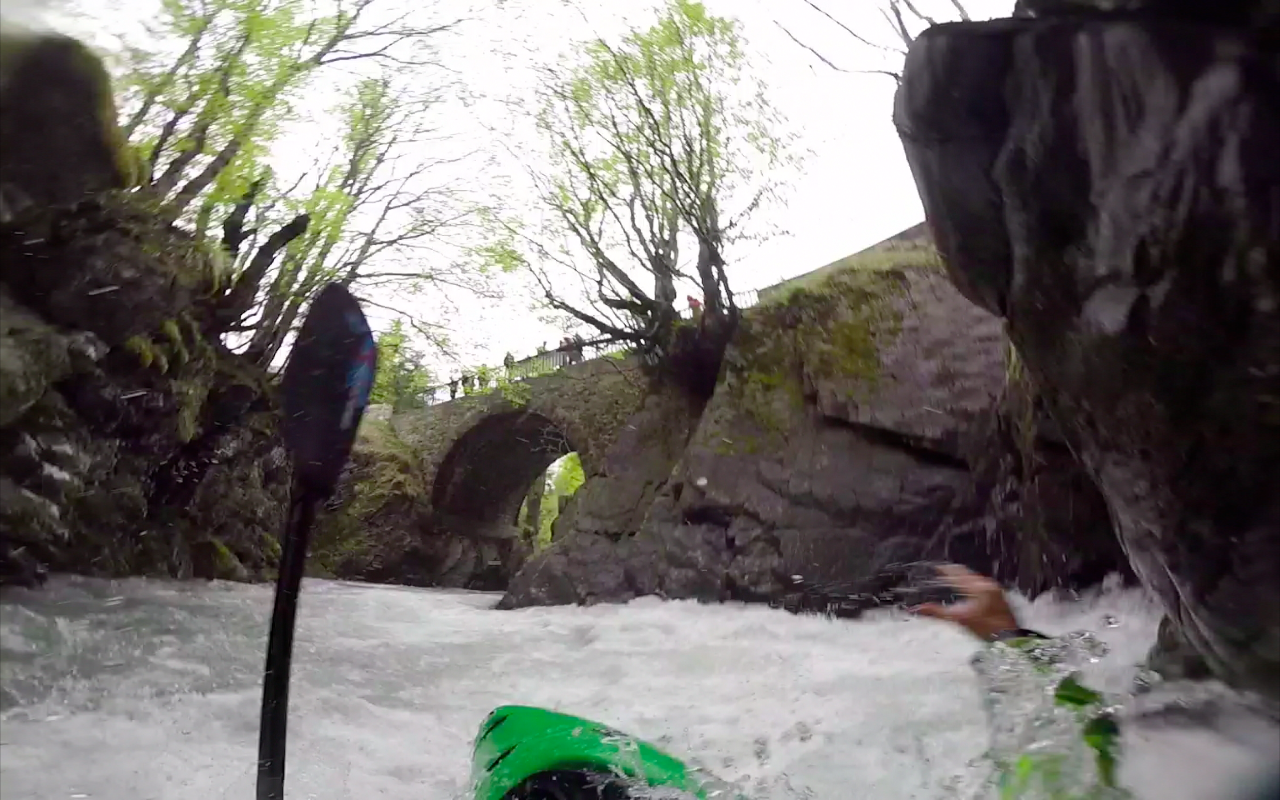 After the team race was coming the individual Long Race. I was navigating smooth when half way of the race lost the hand from the paddle and flipped to be under water for 6 seconds. Going fast on the rapids is difficult and errors can be expensive. 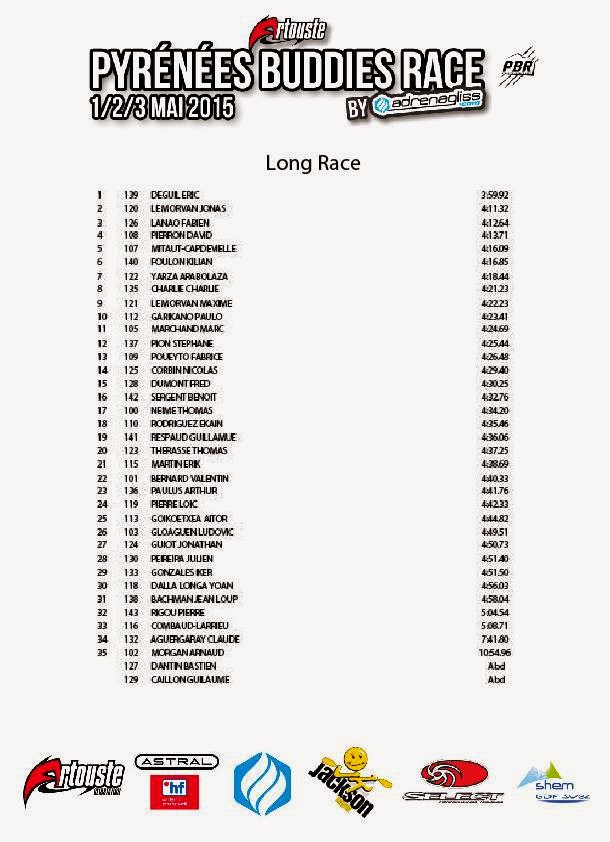 This photo is on the last hard rapid, the show rapid. I saw people going left, middle or right channel, upside down and backward too.

I did a bad run and finished in 7th position. The machine Eric Deguil didn´t fail and won way ahead of everybody. My team mate Jonas 2nd and Fabien the young local 3rd.

These days a beautiful sportive section on the Ossau river is running with water from Miegebat power plant to Eaux Chaudes because of the plant being broken, so a bunch of kayakers we went for an evening class 4+ continious navigation, pleasure!

After dinner a classical PBR saturday night party went on down the valley in Laruns village in Pamplona bar.


The third and last day the river was high-very high. 0´90 at the scale was going to be a record race time. The first one starting was me so I had to focus and I meditate for 5 minutes before the start, I didn´t want to do more mistakes. 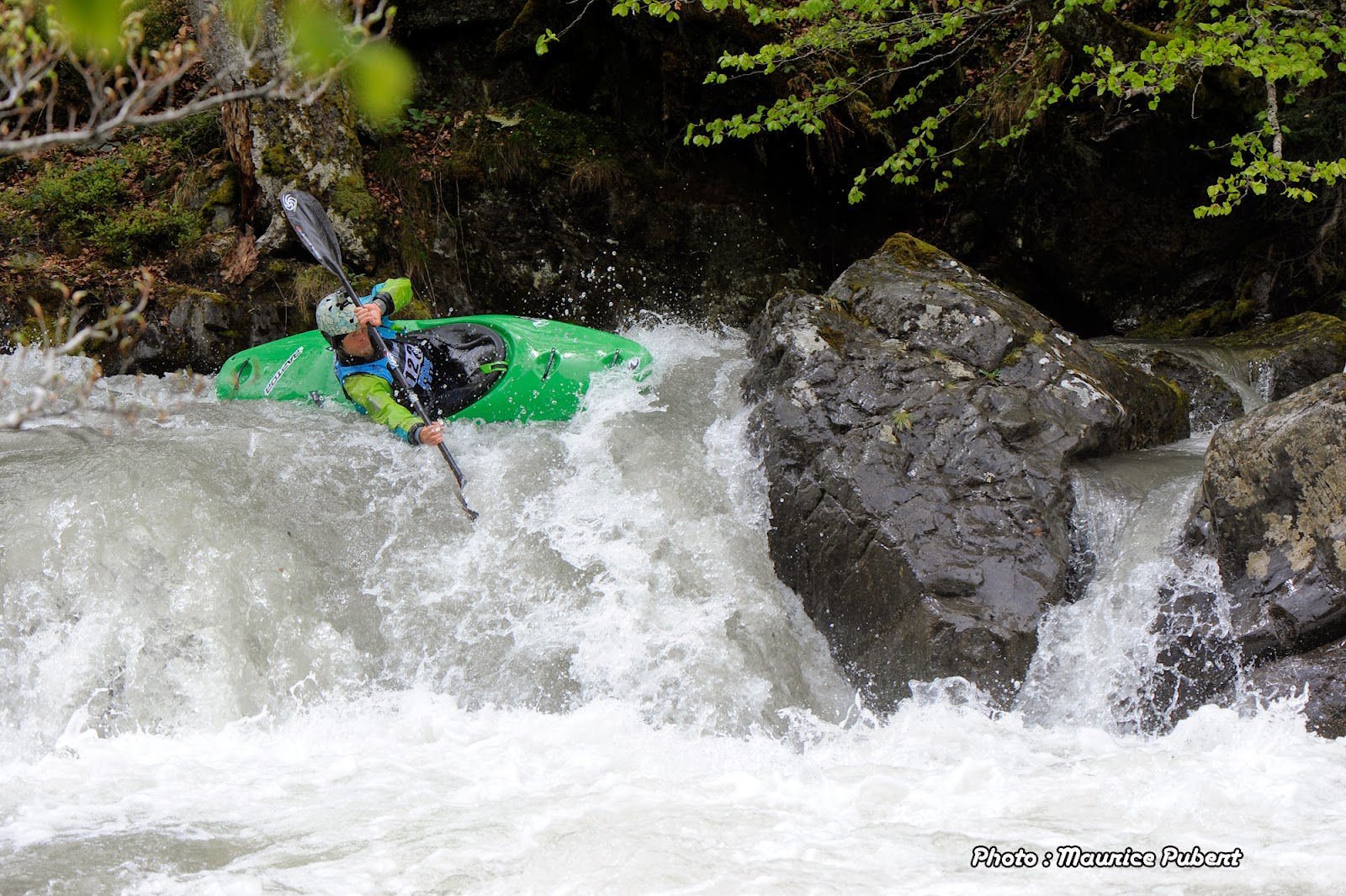 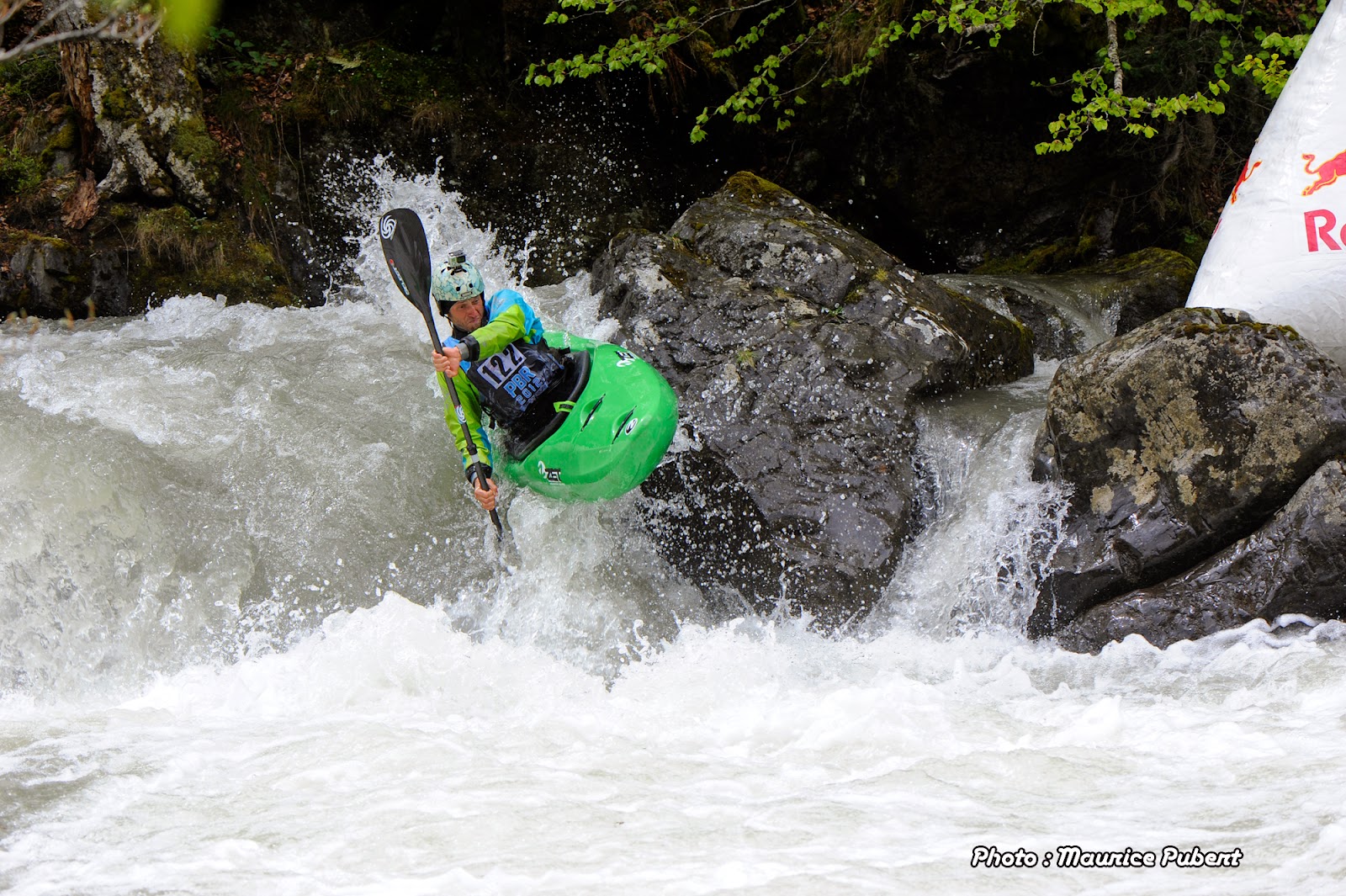 Going hard and big on the core section entry boof.
Thank you very much Maurice Pubert (Momo) for these awesome photos. Merci! 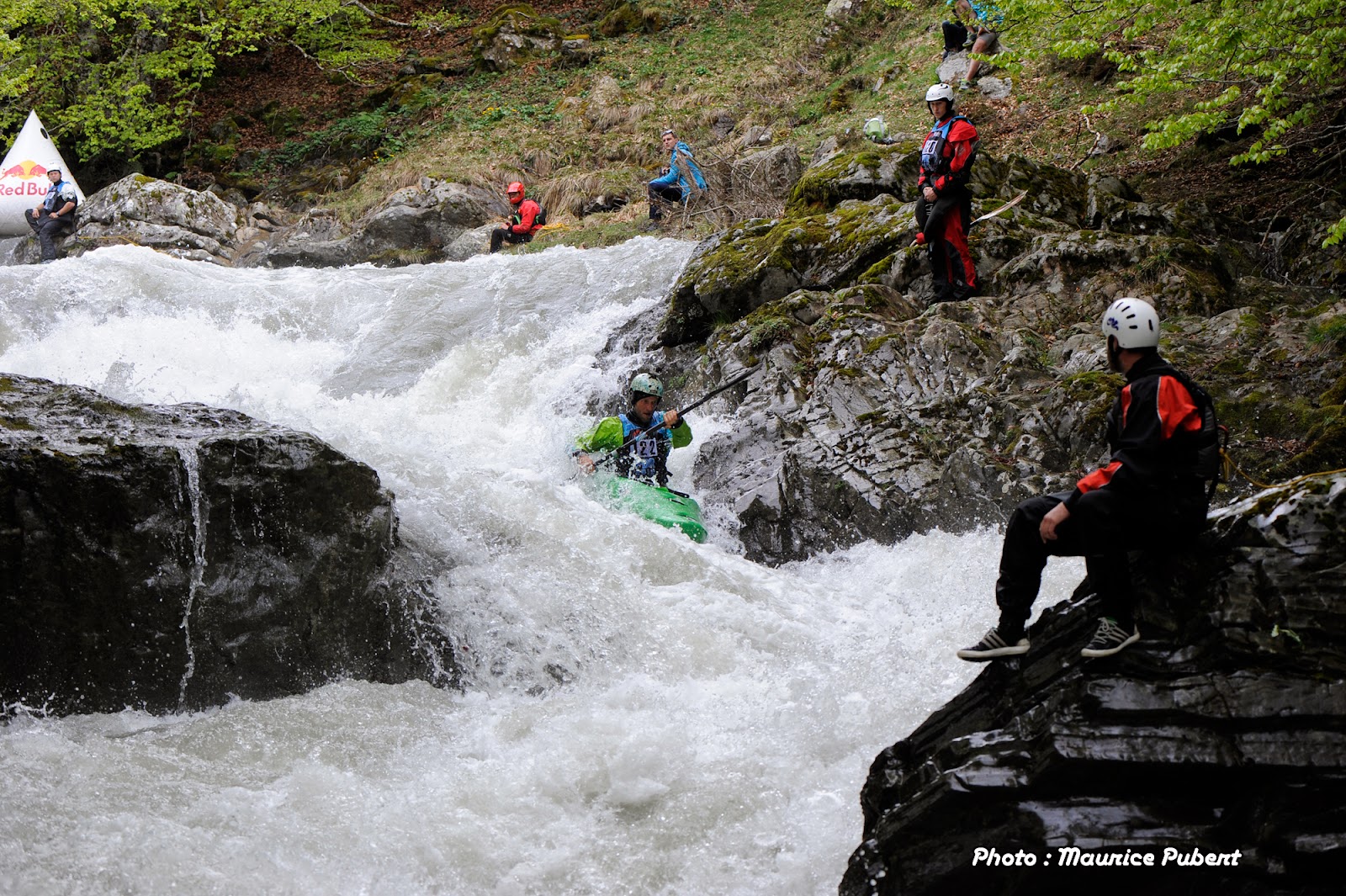 I did not do any major mistake and I was fast. With all the excitement I went to my van, took the throw bag and closed the side door so fast that I trapped a finger. I started screaming but no one was on the parking..  5 minutes later the pain was relaxed. 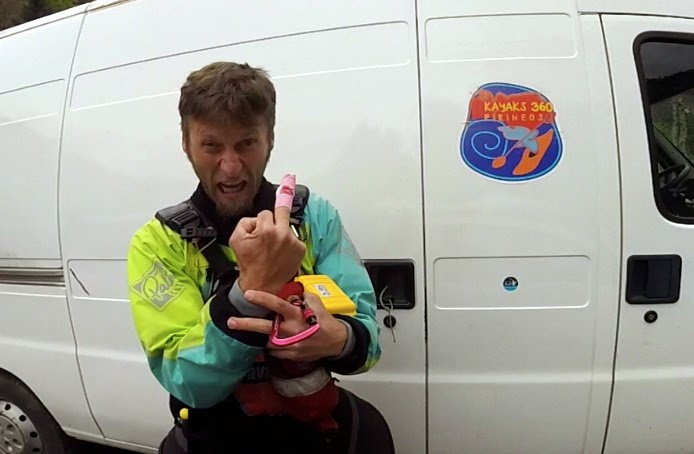 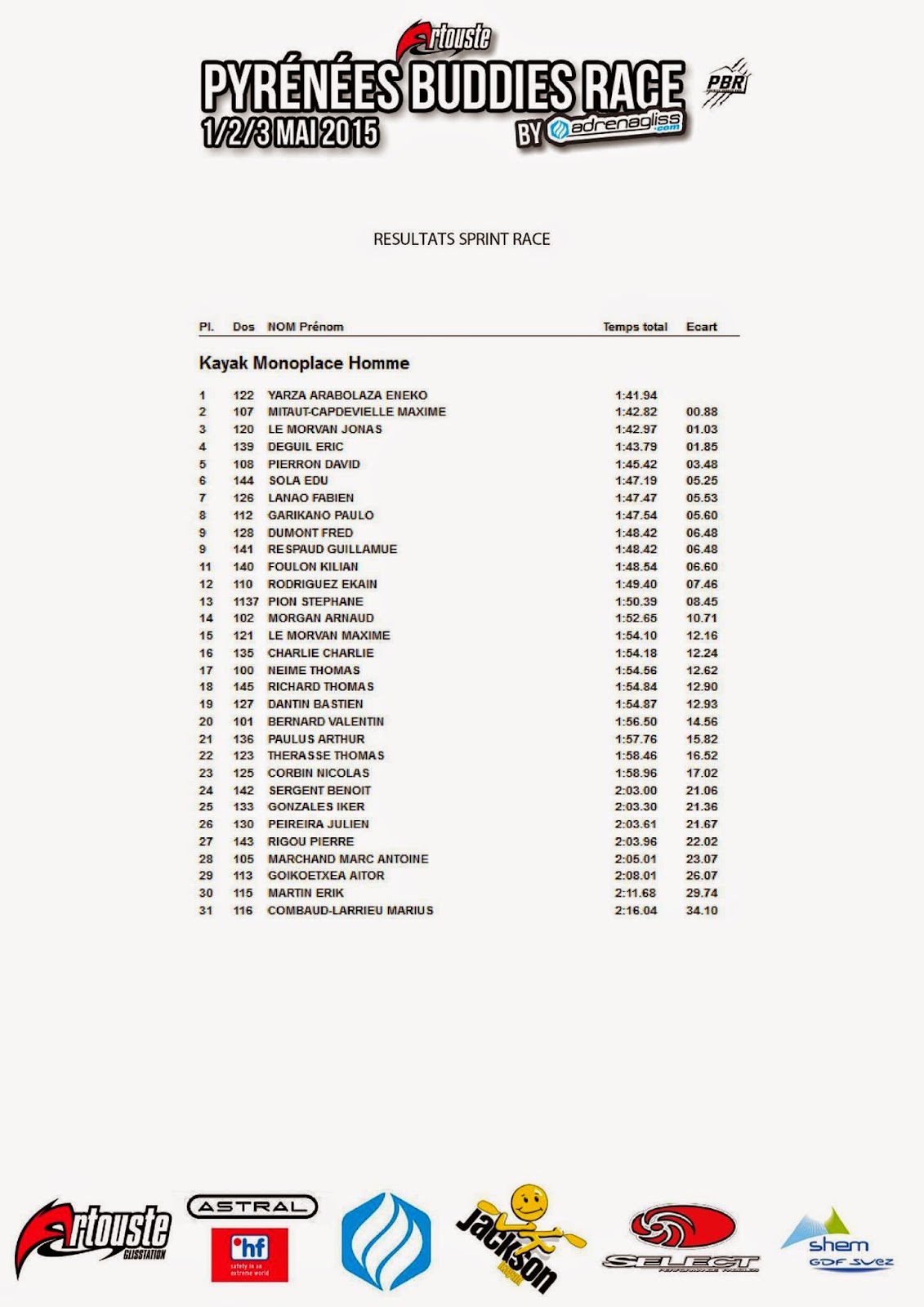 After all the competitors came down my time was the fastest and I win the Sprint Race, Max Mitaut 2nd and Jonas Le Morvan 3rd. Eric did my same error of the day before and he lost time, showing he is a human too! 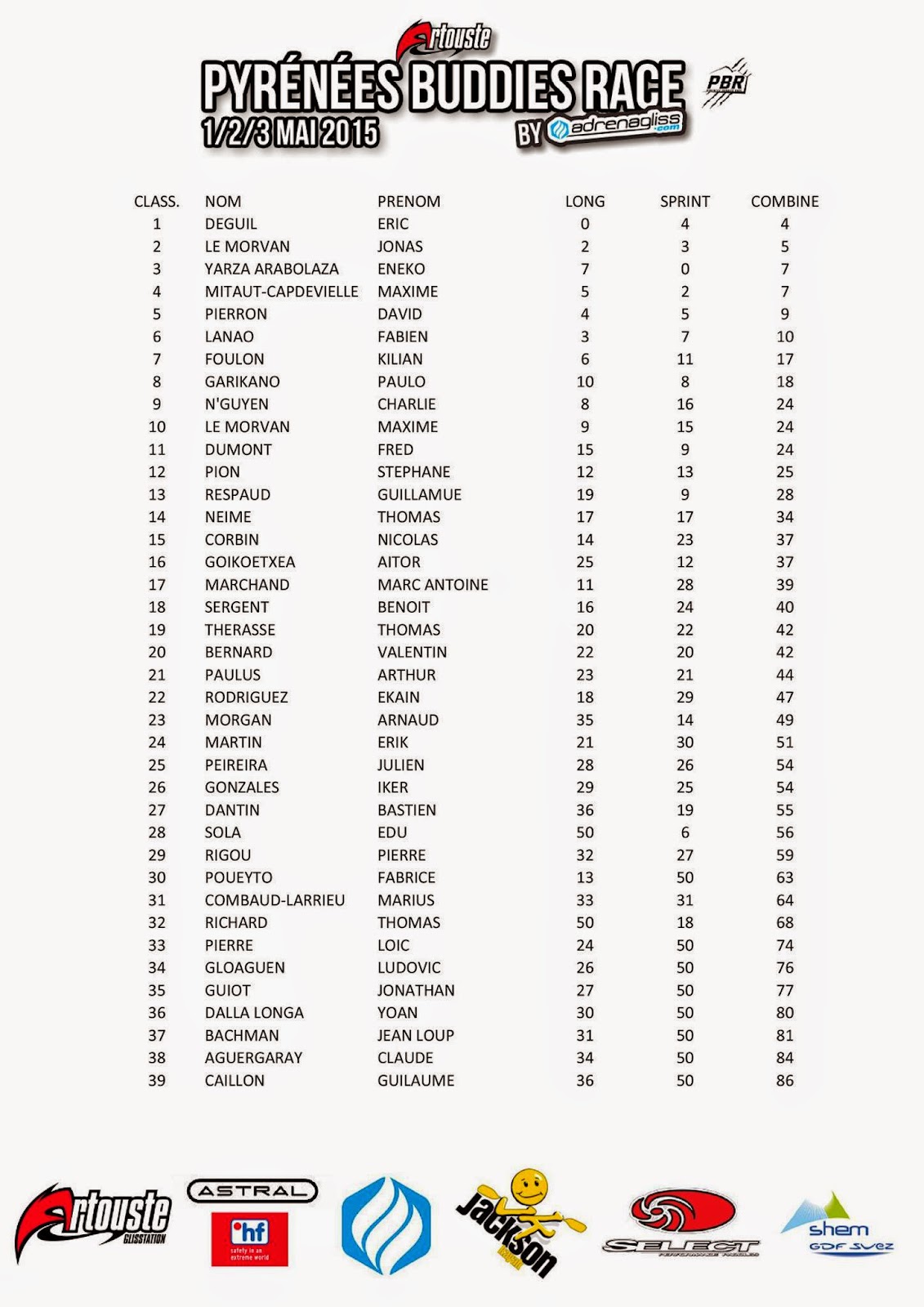 Doing a combination between the Long and Sprint races Eric Deguil the winner, Jonas Le Morvan second and Eneko the Basque 3rd. 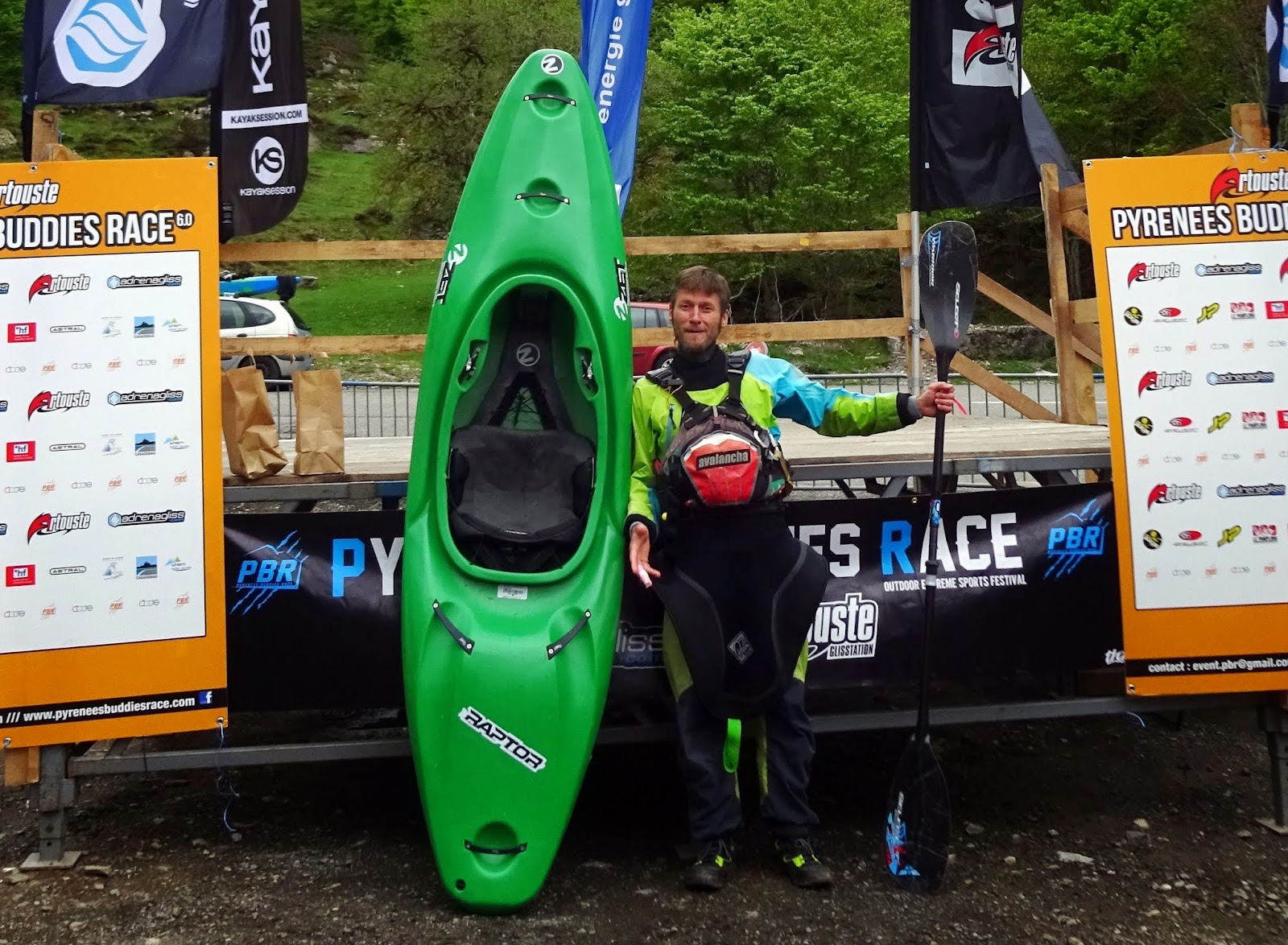 After 3 years not racing I came back to the game of paddling fast and I did it enjoying and winning the Boater Cross and the Sprint Races, second on the Team Race and 7th on the Long Race. I am a happy man with a sore finger.

Thanks to the organizers and thank you very much for the discounts on these great kayaking material:
- ZET KAYAKS
- SELECT PADDLES
- OMEI + PALM equipment
- AVALANCHA lifejacket